Youth Eastside Services (YES) held its annual Invest in Youth Breakfast on March 20 at the Meydenbauer Center in Bellevue.

More than 1,000 people attended the breakfast to hear stories of young people whose lives were changed with the aid of YES.

YES serves as a lifeline for youth and families coping with challenges such as emotional distress, substance abuse and violence. Through intervention, outreach and prevention, YES works to build and strengthen relationships and advocate for a safer community for youth throughout the Eastside.

YES has four main locations in Bellevue, Kirkland, Redmond and Sammamish. However, YES counselors and services are available at more than 50 locations across King County including various teen centers, community centers, and schools in the Lake Washington and Bellevue school districts. Patti Skelton-McGougan, CEO of YES, restate the vision and impact YES has on the lives of local youth at the Invest in Youth Breakfast on March 20. Madison Miller/staff photo

Patti Skelton-McCougan, YES’s CEO, welcomed attendees to the annual breakfast and restated the need for YES’s services and mission.

“A staggering 61.5 percent of these young people do not receive any counseling or treatment,” she said. “If left untreated, teens are at increased risks for problems such as reduced academic performance, substance abuse, risk-taking behaviors and suicide — now the second leading cause of death for 15-19 year olds.”

Skelton-McCougan continued that while these issues are prevalent on the Eastside, they are “preventable and treatable.”

“Last year we helped nearly 70,000 individuals in Bellevue, Kirkland, Redmond and Sammamish communities,” she said. “I’m proud to share that in 2018, 83 percent of those clients reported success in reaching their therapeutic goals.”

One of the ways YES helps local youth is through Youth Success Mentoring. The mentoring program matches adult volunteers and youth who may benefit from additional academic, social and emotional support and encouragement. It helps struggling youth ages 6-17 stay on track to graduate. Adult mentors spend a minimum of 200 hours with their student mentee over the course of a year. Pat, a YES Success Mentor, and Nima, whose last names have been withheld, share the impact a Success Mentor can have at an at-risk youth. Madison Miller/staff photo

Pat, a success mentor, was paired with Nima (both of their last names have been withheld) in May of 2014. Nima and his father immigrated to the United States from Iran when he was 4 years old. They had to leave Nima’s mother behind because of delays in citizenship approval. Nima, now 13, said he needed a positive female presence in his life since he was separated from his mother. That’s when he was introduced to Pat, a recent retiree who had recently moved to the area. Through their relationship and experiences, Nima said having Pat in his life has made him “a more confident kid.”

“A mentor is someone who is always there for you. She’s helped me in so many ways,” Nima said.

The relationship had a positive influence on Pat, as well.

“Having him in my life has taught me so much. I’ve become a part of his family and he has become a part of mine,” she said. “It’s so gratifying to know that I was able to make a difference in his life.”

Erik and Rosa (their last names have also been withheld) shared how being a part of those programs changed their lives.

For Rosa, her brother struggled with a drug addiction and her father had been diagnosed with schizophrenia. To help support her family, she said she had to leave high school. There came a point, according to Rosa, where her family was facing eviction.

“With the support from YES, we were able to avoid being evicted. My [sibling] got the help they needed,” she said.

Rosa said she joined Latino H.E.A.T. to help raise awareness for substance abuse and mental health. Through her experiences, she said she’s planning on becoming a youth and immigration lawyer.

YES also serves youth and families through its mental health counseling, substance use and co-occurring counseling and treatment and psychiatric services. “There’s a lot of factors that can affect our youth,” Brode said. “A lot of kids are under so much pressure to perform well — usually academically — social media is also a big thing that leads to higher levels of anxiety and depression…these issues are growing at a skyrocketing rate.”

Noble and Brode stressed the importance of early intervention for youth. YES introduced a universal mental health screen in Lake Washington and Bellevue school districts last fall to detect youth who may be at risk or have a mental illness.

“It’s unfortunate that kids younger and younger are beginning to suffer from these things but I’m glad we are there and have the resources available to help,” Brode said.

As a parting message, Noble encouraged the audience to work toward de-stigmatizing mental health issues.

“Let’s work toward de-stigmatizing these topics,” she said. “The more we talk about it and the more it’s addressed in common, everyday settings, the better.”

YES board of trustees president Linda Reichenbach said YES hopes to make $760,000 in donations from the Invest in Youth Breakfast. As of publication, the final amount has not been released. 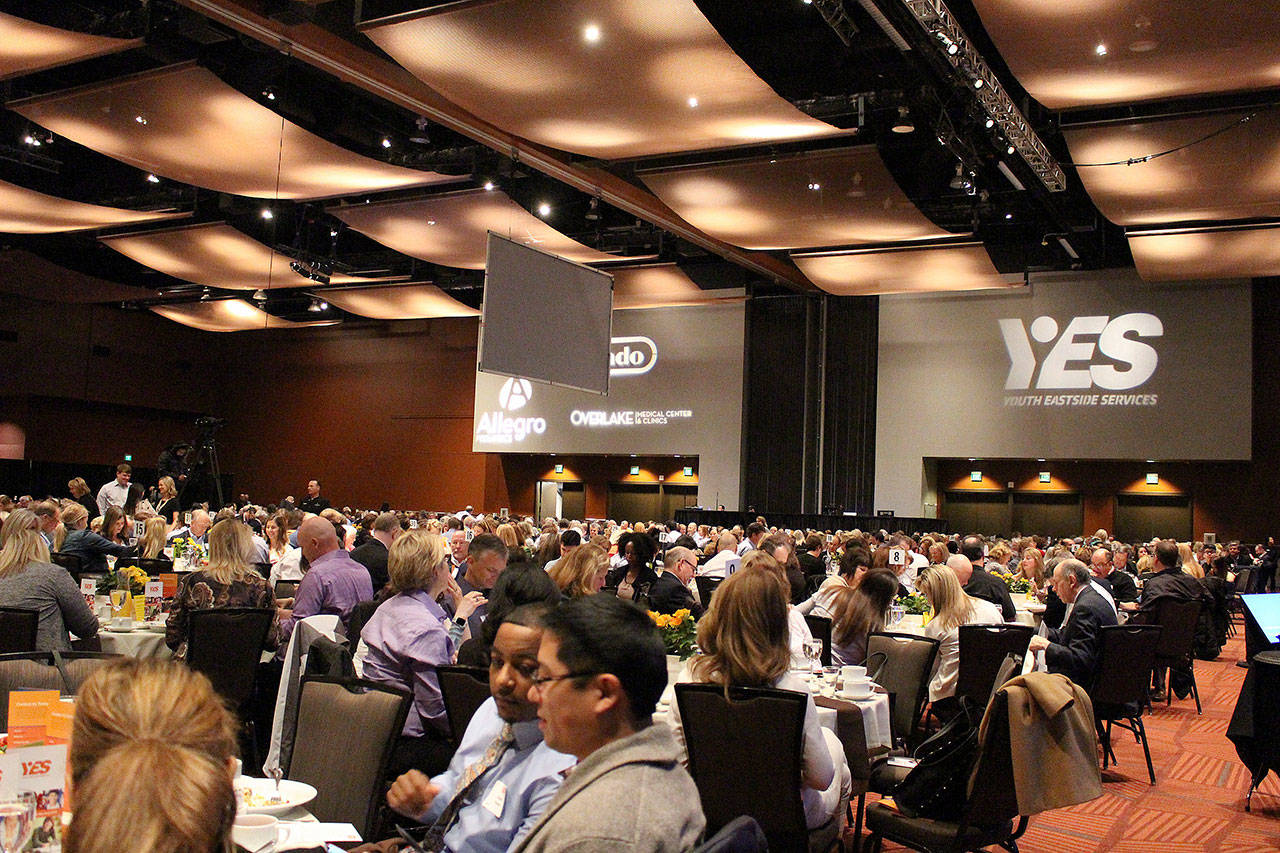 Over 1,000 people attended the YES Invest in Youth Breakfast at the Meydenbauer Center on March 20. Madison Miller/staff photo

Kirkland City Councilmember Neir will not seek re-election in 2019